You are here: Home / Science for Kids / 50 of the Best Slime Recipes for Kids
703 shares

Whether you are new to slime making or a slime pro, you are sure to find some inspiration on this GIANT slime recipes list! 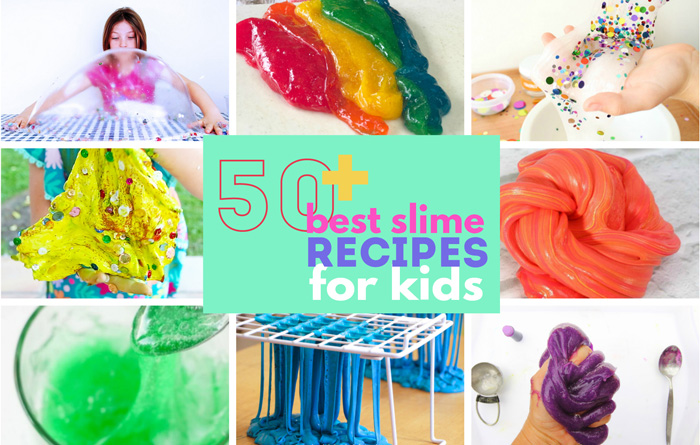 Around our school they call me the Slime Lady. Yup, and it’s a title I actually adore. We have done several slime events at our school where we made slime after slime (wait isn’t that a Cyndi Lauper song?) as well as numerous birthday parties and workshops so I’m used to kids looking at me funny and saying “Aren’t you the Slime Lady?”

Now having made so.much.slime. over the years has also allowed us to try dozens of recipes. I decided it was about time to gather a collection of the best slime recipes we have made as well as some new ones we plan to try!

This enormous slime recipes list is divided into the following 8 categories. Basic, Colorful, Artsy, Scientific, Edible, Scented, Themed, and Holiday. I also listed my top 5 favorite slimes and what ages they are best for. Lastly be sure to check out two resources at the end of our post How to Host an Epic Slime Birthday Party and how to make a seriously awesome DIY Slime Kit.


Is Slime Safe to Play with?

Your biggest slime concern answered! Before we head to the recipes I wanted to answer the most common question I get asked about slime. Is it safe? The answer to this is yes for most people. If you have not seen the video below about borax and boric acid which is the activator in almost all slime recipes (excluding edible slimes) then please watch it now.

When is it not safe to play with slime? If you have a child with skin sensitivities please keep an eye out for any skin irritation after they have played with slime.  Boric acid is used as soap and in saline solution used to clean contact lenses so it is typically safe use on your skin.

Issues with rashes and burns come up when there has been an excessive amount of skin exposure to borax. Many common household substances (salt and even water) can be harmful when used or consumed in excessive amounts, the same goes for borax. The amount of borax used in the classic gak slime recipe is minimal.

Please do use recipes as a guideline for how much activator you will need, and if you child’s skin is indeed sensitive, work with the edible slime recipes below. 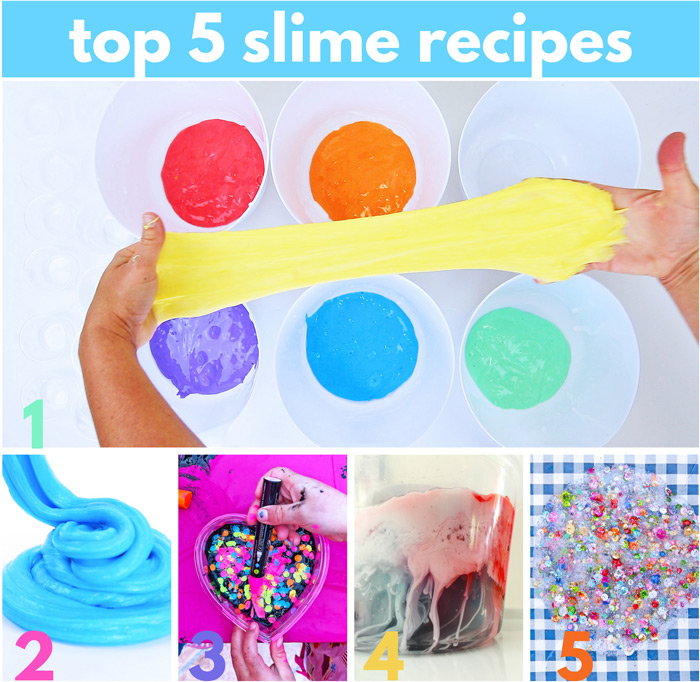 Even slime averse adults love this slime! The texture is so soft that you cannot resist playing with it! This is great for kids 5 and up.

Shaving cream makes this slime much less sticky than all other slimes and is my go-to recipe when working with little ones. Best for kids ages 3+.

We have made this at several birthday parties/workshops and it’s always a hit! The black slime paired with colorful chalk markers always wows kids! Send kids home with a container of the slime and a chalk marker as party favors! Great for ages 5+.

After about a week this slime goes through a brittle phase where it feels a bit hard and you may be tempted to toss it but wait!  Let it sit another week or so and then it will soften up again. This is literally the only slime we’ve ever opened months after making and found to be just like the day it was made. Given the slime making expertise needed to make avalanche slime I recommend this for kids ages 9+.

Clear slime takes patience and will power to keep it from getting cloudy so I don’t recommend it for beginners or little ones but once your child has mastered slime making they have to make Ice Slime. It’s so pretty! Ages 7+

50 Of The Best Slime Recipes

Keep this list handy for the next time you want to try new slime: Pin it here! 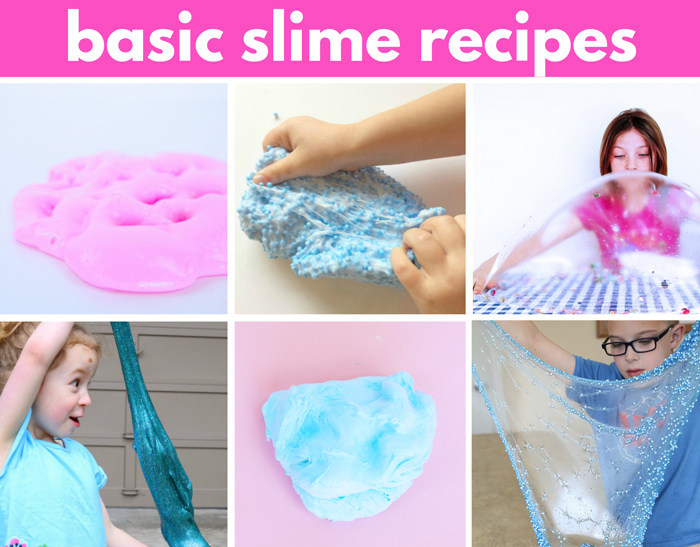 My go-to slime recipe uses liquid starch as the activator. If you don’t have liquid starch available where you live you can usually substitute laundry detergent. It will need to contain boric acid. Classic Gak is the slime recipe made with Borax that most of us know from science class as kids! 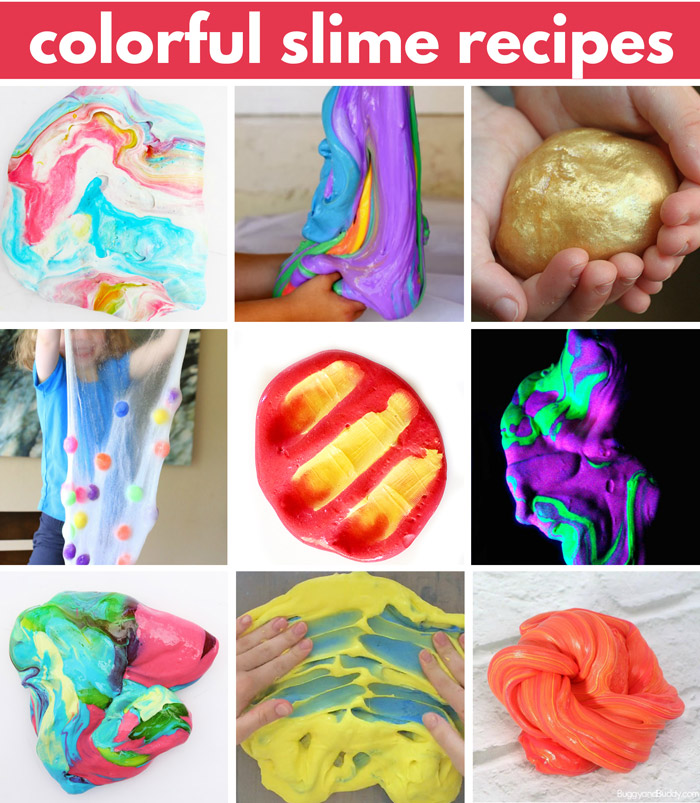 It’s always fun to swirl different colors of slime together and watch the effects! If your child loves color try some of the slime recipes below! Please note that when you mix colored slimes they do end up getting muddy. If you want to have colorful slime AFTER kids play with it, I suggest mixing no more than two primary colored slimes together. You’ll of course end up with a secondary color!

Glow in the Dark Slime 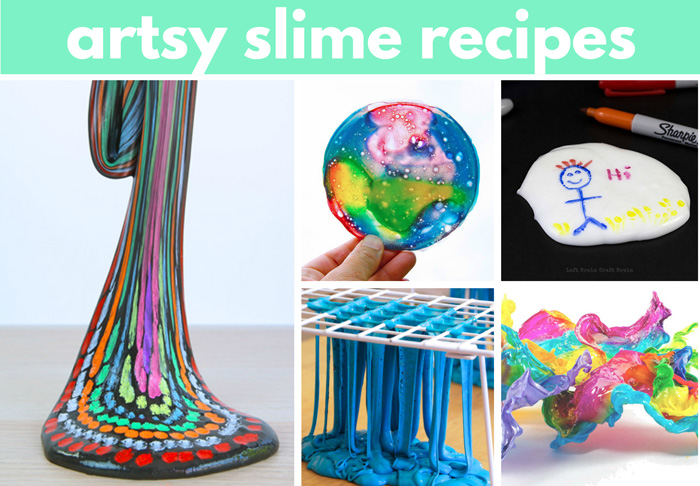 Yes slime can be used in art! My camp co-creator is an art teacher and we have chatted at length about how to incorporate slime into an art project. Here are a few ideas you can try to bring an artful angle to slime. 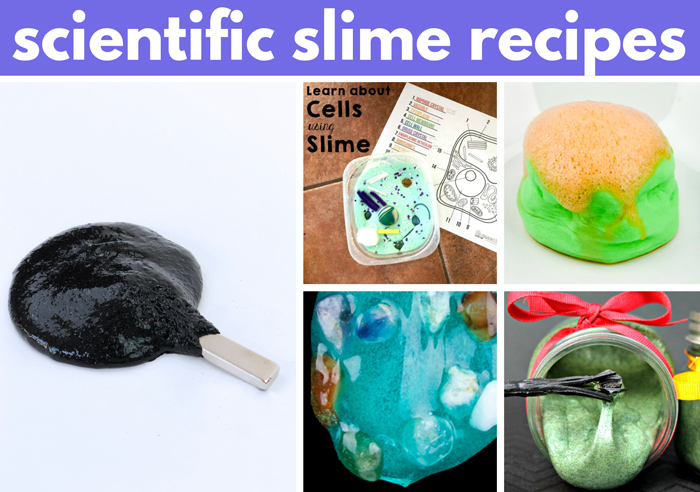 Beyond slime itself being an amazing chemistry experiment, you can use it to introduce other scientific concepts. I am a HUGE fan of the cell slime below. 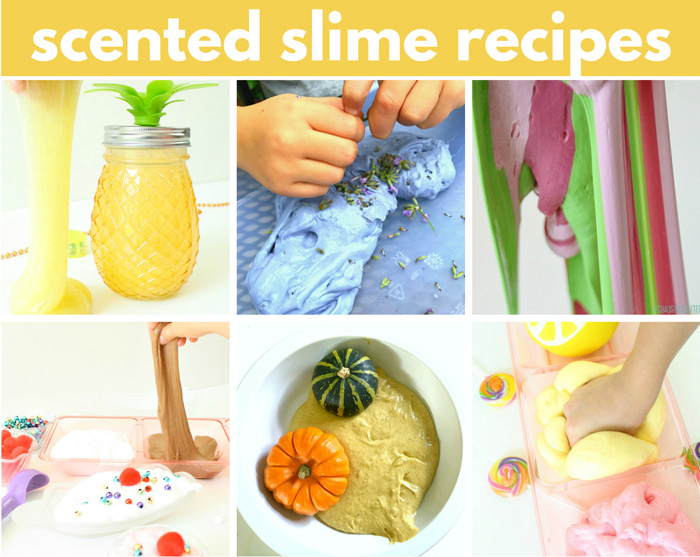 Just like playdough, you can add scents to slime! Scents are wonderful idea if you are using slime as calm down activity especially scents like lavender which have a relaxing effect. And if you are an expert slime maker, scents are away to change things up a little! 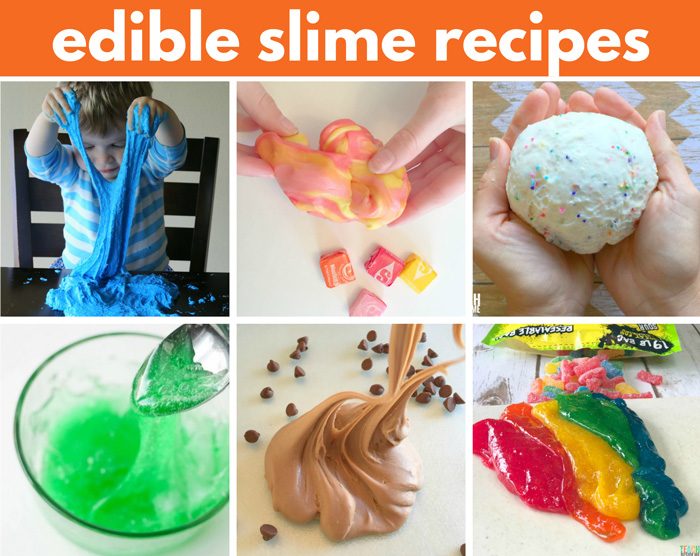 While I never recommended making slime for consumption, all of these recipes are taste safe! They use edible ingredients and are great to use with kids who may have skin sensitivities or are prone to putting things in their mouth. 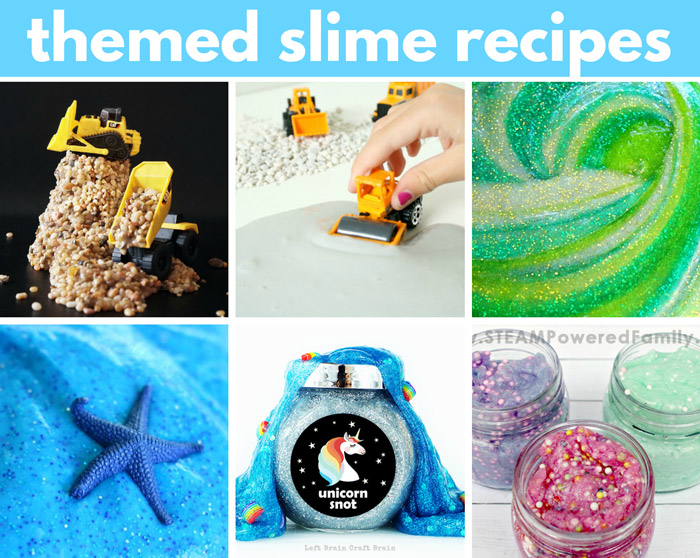 Get even more play time out of slime by combining it with some of your child’s favorite interests! Kids love themed activities so this is a way to tie slime into a themed birthday party, school topic, or childhood interest. 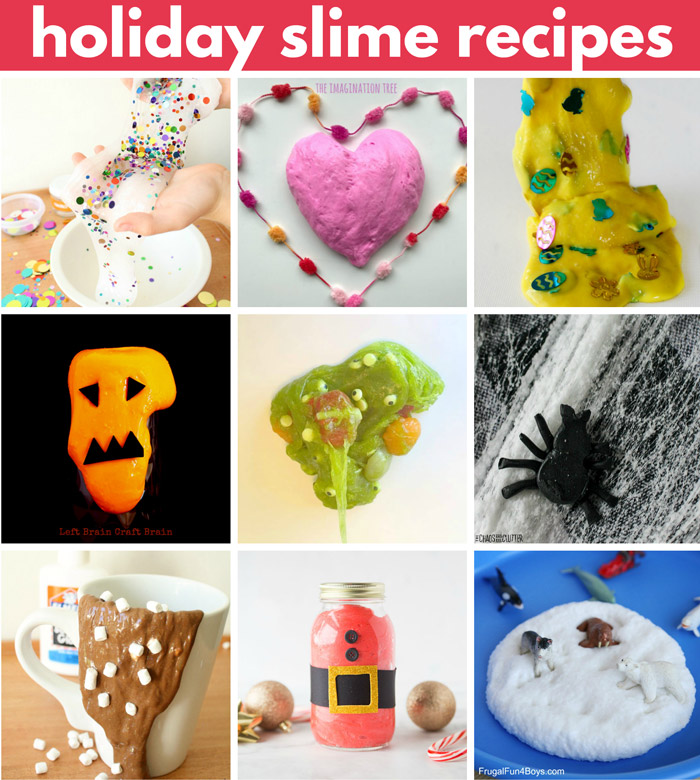 Another fun way to incorporate kids’ love of slime is to tie it into the seasons and holidays! The Halloween themed ones are brilliant since obey gooey slime goes great with the whole “ick factor” of Halloween.

Are there enough slime recipes here to keep you busy? In fact this is really a years worth of slime if your child makes one slime a week off this list…just sayin’…you got it planned! And if you really want to keep going here are two more ideas for you”

My daughter asked for a slime birthday party several years ago and here’s how we did it! Other slimes that are great for parties or events are Butter Slime, Fluffy Slime (pretty foolproof) and Chalkboard Slime. 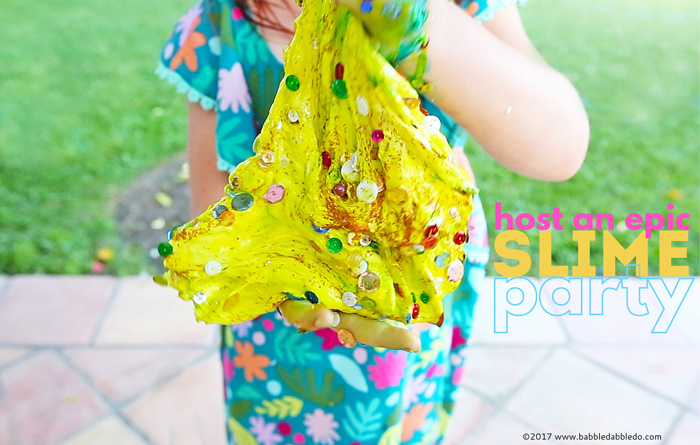 Most slime kits have enough supplies for a few batches at most. This DIY kit has enough for 64 matches…yes 64 batches of slime… See what we included here. 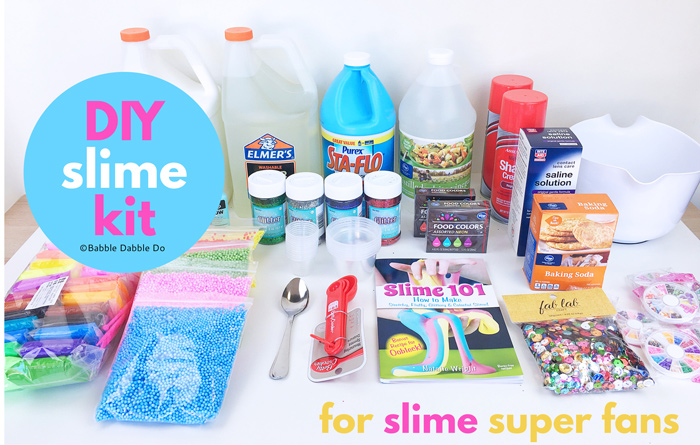