You are here: Home / Science for Kids / 4 Easy Magnet Experiments That Will Amaze Your Kids
7048 shares

This super simple set up yields 4 easy magnet experiments that kids will absolutely love! And it just so happens these project are a great tie into Valentine’s Day though honestly they are fun any time of year! So what does magnet science have to do with Valentine’s Day? Well….

This project was originally part of the sensory series Playful Hearts: Valentine’s Inspired Play & Learning. For more projects in the series scroll to the end of the post.

Have you ever noticed that some of the common sayings people use to describe love and attraction are based on the scientific phenomenon of magnetism? Here are some examples: They had a magnetic attraction. He exudes animal magnetism. They are polar opposites. I was drawn to her. She has a magnetic personality.

It makes sense that love and magnetism are synonymous. Love is that indescribable feeling you get with certain people that makes you feel all warm and gushy. In the case of romantic love perhaps it makes your heart race, your palms sweat and you can’t help but feel its strong force.

Magnets have a similar effect. Magnets are objects that exude a strong force field around them that causes them to attract ferromagnetic materials and other magnets themselves. Strong magnets are drawn immediately together when placed in close proximity. And did I mention that this magnetic field is invisible, just like love? You can’t see it but you can certain feel it, and it’s a fun sensory experience for kids to try and “touch” an invisible force. For our post today we made a simple pyramid structure that will give you the chance to explore the invisible and strong attractive force called magnetism.

This post contains affiliate links to products I recommend to my readers.

To Make the Clay Version: 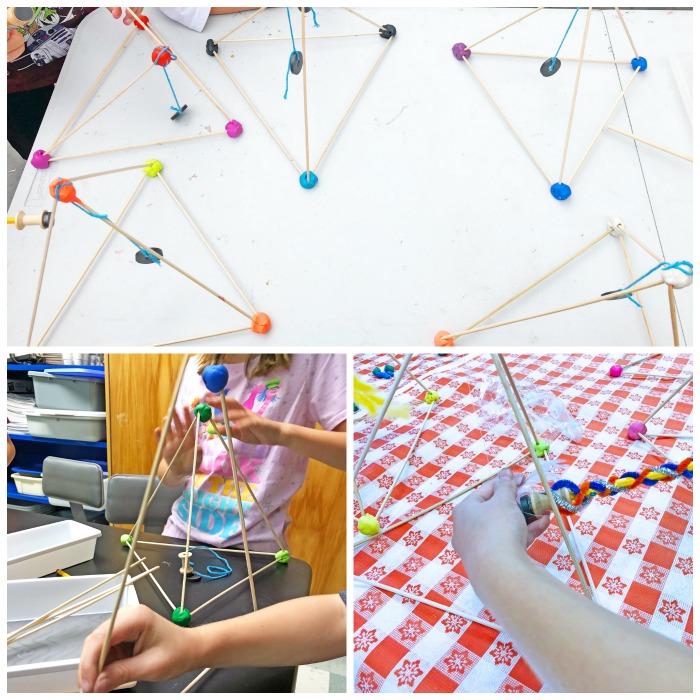 This little DIY pyramid structure can be used to make several different observations about magnets. I loosely divided them into 4 mini experiments you can first watch in this video and then read about below.

Magnets have a north and a south pole. This means that one end of a magnet attracts and the other side repels if placed next to another magnet. This is a fun observation to make with magnets of any kind. To see how this repelling and attracting can drive a magnet crazy try this: Place one ceramic magnet under the center point of each bottom chord of your triangle base. Now gently lift your donut magnet and let it swing. It will bounce back and forth between the three magnets’ fields as it encounters the different polarities. It will look like a wildly indecisive magnet that has no idea where to go! Move the rectangular magnets around to see what happens to the center magnet and how it swings based on its proximity to the different magnetic fields.

This is my favorite experiment. Let the donut magnet rest as still as possible at the center of the pyramid. Now take a magnetic wand (or a strong magnet) and begin gently waving it near the donut magnet (don’t get too close or the magnets will stick together). Watch as the donut magnet begins to sway and twirl. You can really make that donut magnet shake it’s groove thing simply by moving your wand nearby! Because our donut magnet is suspended by a string it amplifies the twirling action. And for any doubters who think that the slight breeze generated by waving your hands is causing the magnet to dance, try waving your hand nearby without the wand. The donut stays put.

Leon Theremin.  How many of you know and are fascinated by the musical instrument known as the Theremin? If you don’t know what I am talking about please go watch this video RIGHT NOW of the most well know Theremin performer Clara Rockmore.

The Theremin is the only musical instrument that is played without physical contact. It was invented in the 1920s by Leon Theremin and is based on the phenomenon that interrupting an electromagnetic field can produce audible frequency changes. Essentially the Theremin has two antennae that broadcast a signal to each other and when you wave your hands between the antennae you interrupt the magnet field between them causing the signal to change. Here is a great little video demonstrating it.

Leon Theremin was a Russian scientist who discovered this phenomenon when working on proximity sensors for the Russian government. He went on to patent this electronic musical instrument and it’s eerie sound can be found in many a sci-fi movie soundtrack from the 1950’s. Though it became associated with campy film soundtracks in the 1950’s it was actually used in some classic films like Spellbound and The Lost Weekend and is most famous in popular music in the song Good Vibrations from the Beach Boys.

Magnets are one of my favorite materials to work with and these easy magnet experiments are simple to set up and kids love to watch them in action! Magnetic attraction is seemingly magical and I haven’t met someone yet who isn’t momentarily mesmerized by it’s power and behavior, just like love.

Check out my fellow bloggers posts related to sensory play and discovery for Valentines Day:

Share This
7048 shares
We use cookies to ensure that we give you the best experience on our website. If you continue to use this site we will assume that you are happy with it.OkRead more