You are here: Home / Engineering for Kids / Science for Kids: Scupley Ships
171 shares

As far as science for kids goes, my favorite classic project is Floaters and Sinkers. It explores the idea of object density. Clay boats are a perfect companion science experiment demonstrating that not only density but shape effects whether or not an object floats. To brighten up this classic project a bit we used colorful Sculpey. And don’t miss the storytelling offshoot of this project, all invented by a 4 year old….I originally spotted clay boats in this go-to book Science Arts: Discovering Science Through Art Experiences by Mary Ann Kohl. 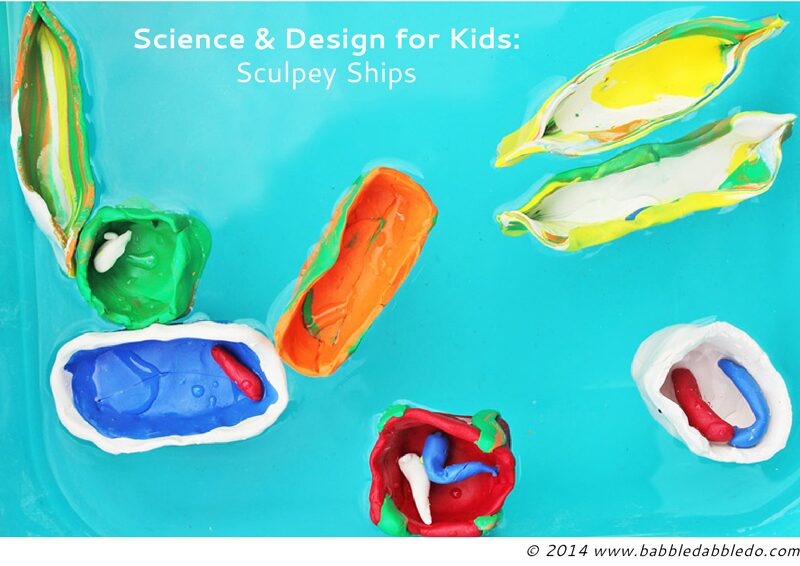 Sculpey  Ships demonstrates the concept of displacement; if a shape/object can push away fluid equal to its weight it will float, no matter how heavy it is. So here is the challenge for your kids:

Can you make a floating clay boat?

Before building anything you will want to show your kids that a mound of clay will not float. Give them a handful and have them drop it in the tub full of water. It will sink. Now challenge them to sculpt the clay into a shape that floats! 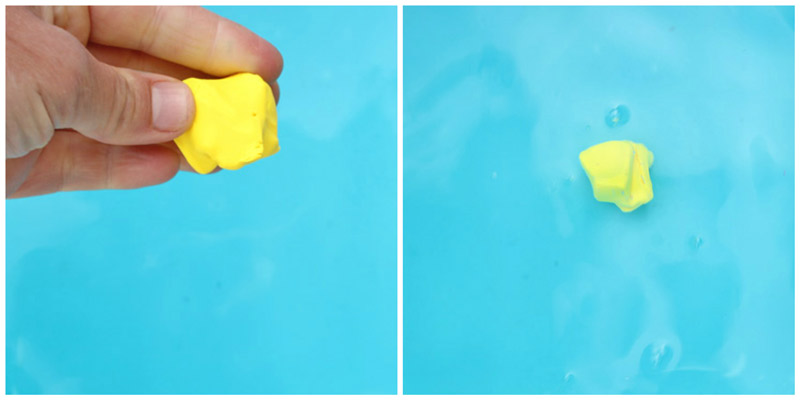 This post contains affiliate links to products I love and recommend to my readers, plus it keeps this little blog o’mine afloat (no pun intended with this project)! Thank you! 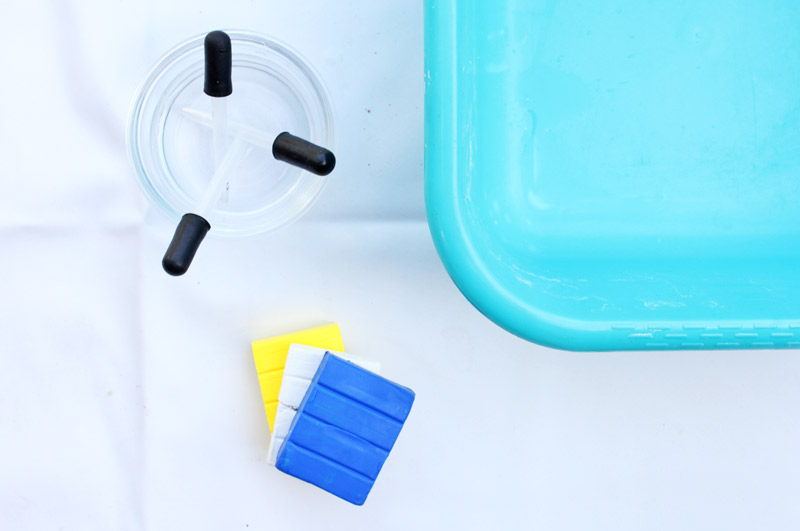 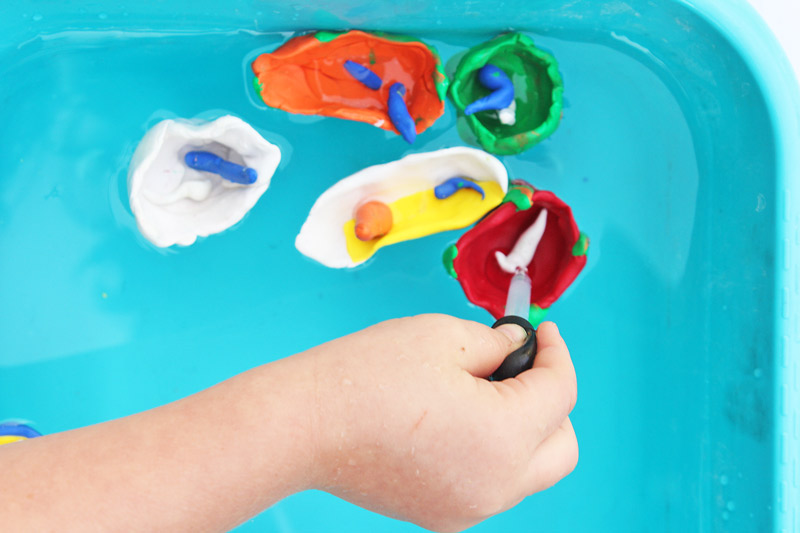 If you have older kids allow you kids to try the experiment first without any hints. If they are younger, however,  you might want to make a sample boat that floats to show your kids. My son’s first several attempts sank to the bottom of the bin and he was convinced that they would never float. When I molded a simple shape that floated he was amazed and encouraged to try again. My daughter immediately made about 10 boats as soon as she saw a winner and couldn’t wait to test them out.

The Titanic. When my oldest turned 5 he went through a major Titanic phase. As in MAJOR. He was really obsessed with the idea of this massive ship sinking. The funny thing was that unbeknownst to him my mother also had a huge fascination with the story of the Titanic, so we had plenty of Titanic paraphernalia to share. It truly is a captivating story on so many levels, for me the engineering failure is the most interesting part of the disaster. Use the Sculpey ships to illustrate what happens when too much water enters a floating boat.

As usual, no project ever goes as planned in our home. When I originally decided on this project I thought of it as strictly science and design, but my 4 year old completely surprised me by incorporating pretend play and storytelling into the fun. As soon as we had a few boats Clara started populating them with little clay “people” and told me exactly who they were and who was in what boat together. When a boat sank, she created a little story about it. It was an offshoot of this project I never would have dreamed of and I was completely impressed by her creativity. So maybe I should categorize this project as Science, Design, and Storytelling for kids! 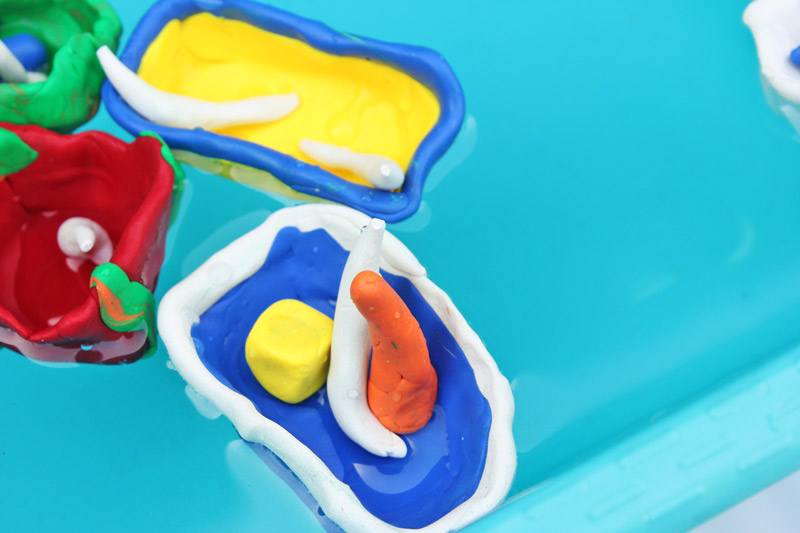 Sculpey ships are simple engineering project for little ones.  It may seem too simple to engage your kids but trust me, try it! They are a great way to explain the concept of displacement with a hands-on activity and your kids won’t even realize they were designing and exploring science at the same time. 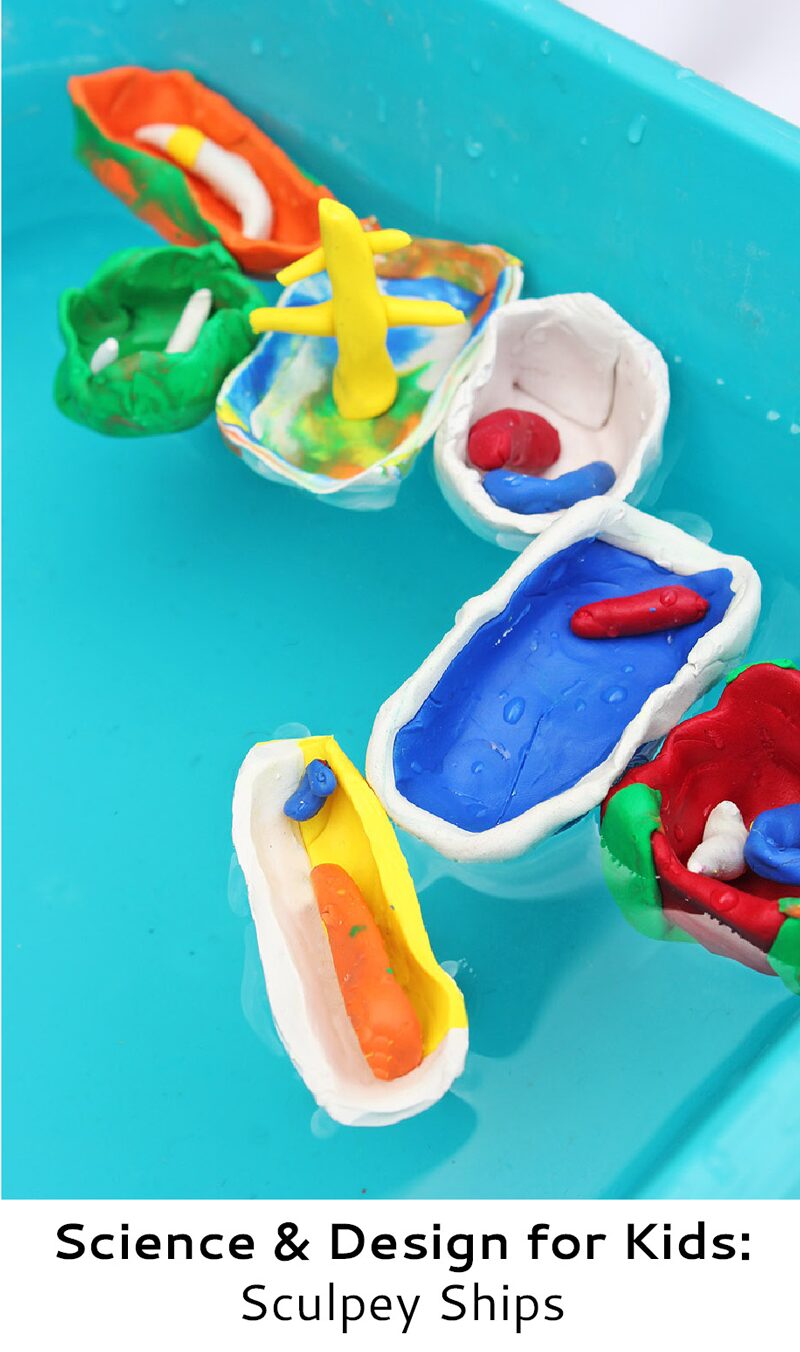 With all this talk of Floaters and Sinkers go on and see the project already! Love the idea of introducing engineering to kids? Try making toothpick structures.

Here are three more classic science experiments to try with your kids. They will not disappoint!

Clay boats and other artsy science experiments can be found in Science Arts: Discovering Science Through Art Experiences by Mary Ann Kohl. It’s one of our go-to books for offbeat projects!

And don’t miss out on more science for kids here on Babble Dabble Do!  Subscribe below or like us on FB.

Share This
171 shares
We use cookies to ensure that we give you the best experience on our website. If you continue to use this site we will assume that you are happy with it.OkRead more