For our third and final straw project (for now….) I’m completely geeking out with this straw geodesic dome & sphere. I have pretty much lived and breathed architecture my entire life (my father is an architect as well) so I have been familiar with geodesic domes practically since I learned to walk…okay maybe not quite that long but you get the picture…..so I’m really curious if everyone else out there is as fascinated by them as me. If you are please leave a comment below telling us your favorite example of a Geodesic Dome!

For those of you that are just tuning into domes scroll down to the “Looks Like” section of the post for a quick primer on domes and their master, the one and only Bucky Fuller, as architects and designers go he considered a legend.

We have a fabulous Geodesic Climbing Dome in our backyard that has provided a lot of fun for my kids over the past few years. My son and I tried to replicate it when building straw structures out of triangles, you can see our version here, but it wasn’t a true geodesic dome. Building a true geodesic dome out of straws involves some math. But don’t be scared by that! I promise it’s only one simple equation that I you can do with a calculator! I also wanted to create a tutorial that makes it about as easy to make a geodesic dome out of straws as humanly possible. I think I got pretty close. 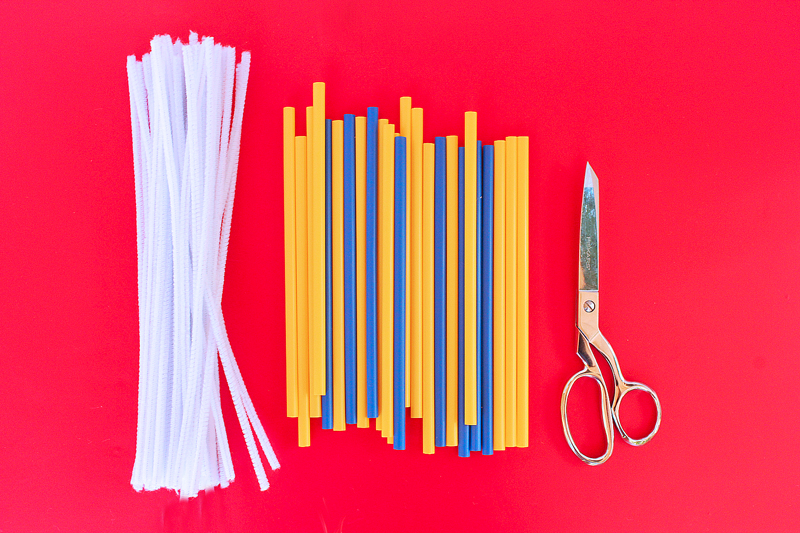 To visualize this project ahead of time here’s the basic plan:

Note: We will be cutting two sizes of straws. For ease of understanding it’s best to cut the different sizes from different colors. That way it’s easy to keep track of which are the longer struts and which are the shorter. 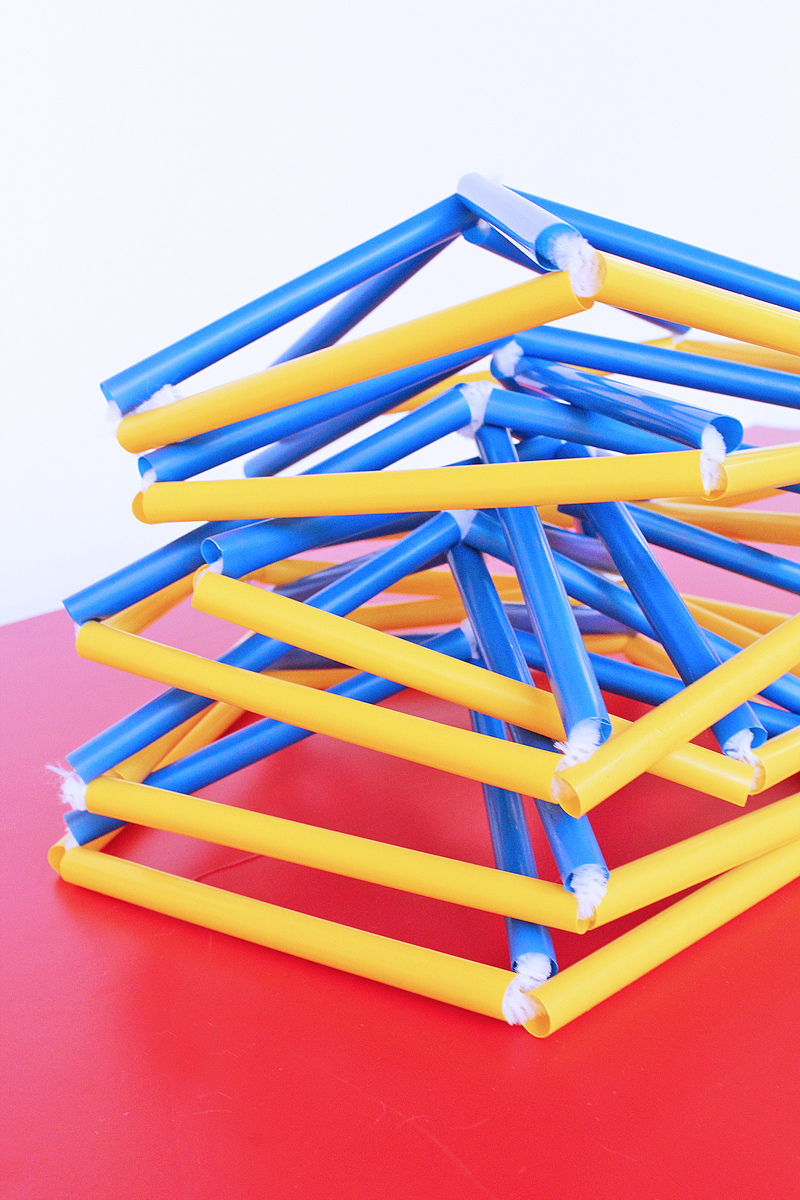 Now that you have the basic shape that will form the dome all you need to do is connect them together. For a dome you will need 5 Strut B’s to form the base. If you are making a full sphere you can eliminate the extra struts as the pentagons from one side will join the second side of the sphere.

Dome- For ease of reference I have shaded in the center pentagon in this visual tutorial. Trust me, it look more complicated than it is. 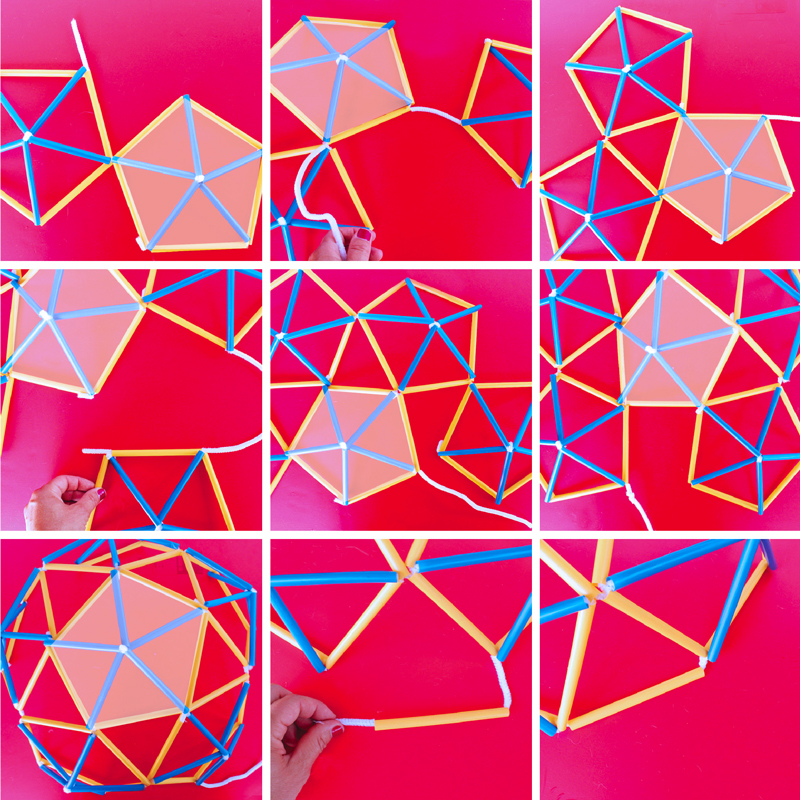 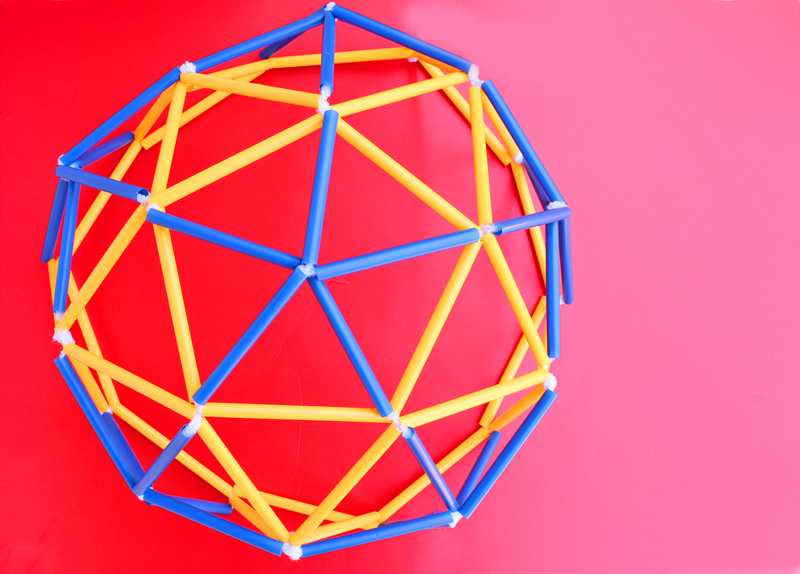 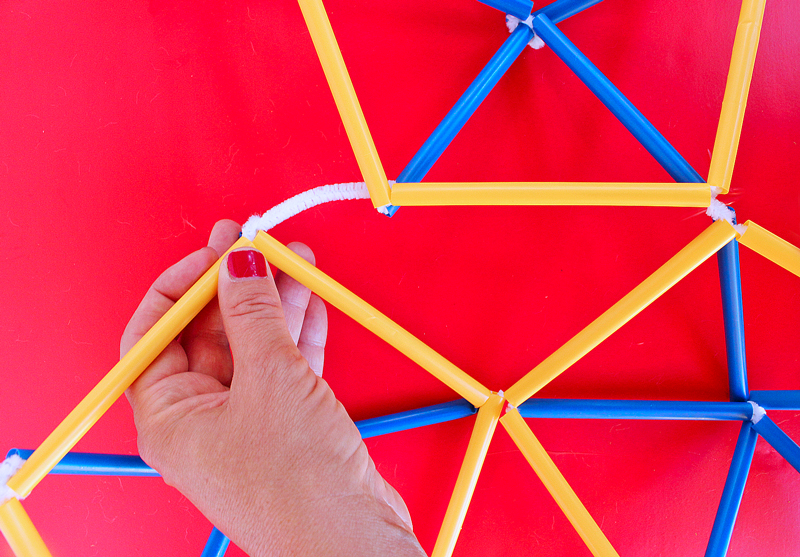 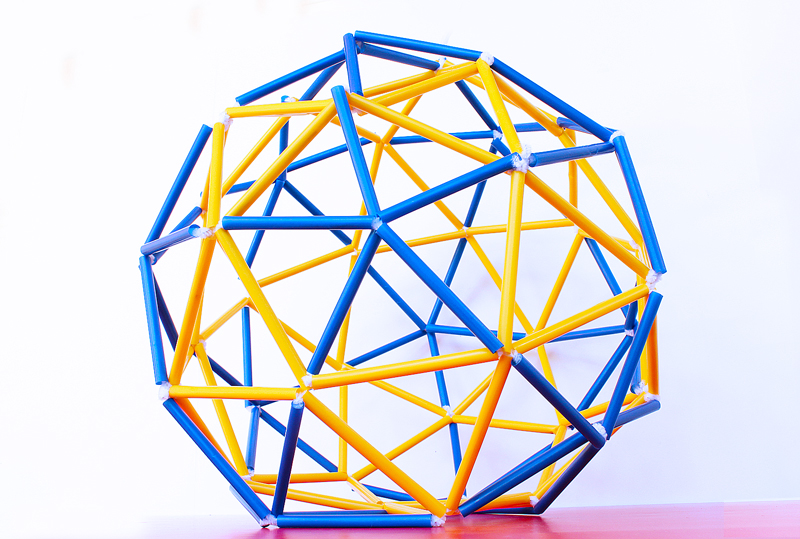 You may think it looks complicated and but it’s actually really easy to make both the dome and sphere once you see the pattern. In all fairness I built this dome and sphere. My kids are just a wee bit young to tackle this project, although my baby had fun trying to thread pipe cleaners through straws… I know it takes some time but breaking this project down to basic shapes made it very easy to build and understand. Here’s my son with the dome so you can see how big it actually is. 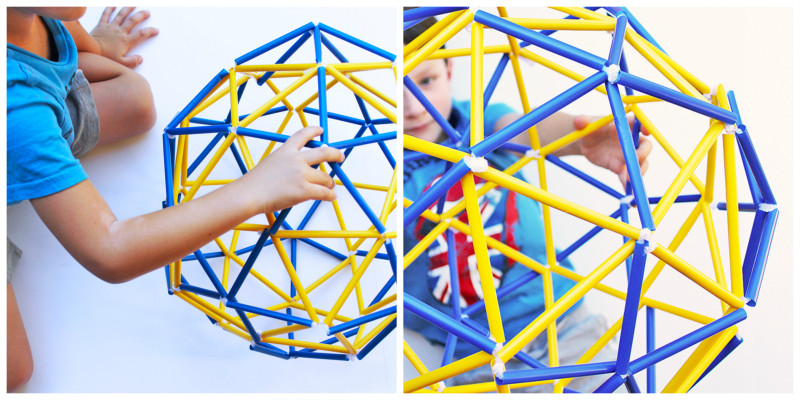 Why are geodesic dome so fascinating to designers?

Geodesic domes are very efficient structures. Triangles are inherently stable shapes, so creating structures out of interlocking triangles makes very strong, yet incredibly lightweight structures that can be adapted on a small level, like our project here, to a massive level as in the Montreal Biosphere constructed for the 1967 World’s Fair.

The Math Behind the Dome

The first step in designing a geodesic dome is to determine the frequency of the dome, denoted by the letter V. At a minimum you need a frequency of 2*. In simplified terms it means you need 2 different strut or chord lengths.  The more struts/chords you have the more rounded the final shape will be. The straw geodesic dome/sphere here is 2V. 3V and 4V domes are also very popular t make. If you want to build one or even a more complex dome check out this geodesic dome calculator.

*Theoretically a 1-frequency dome is possible but it makes the shape of an icosahedron, which doesn’t quite have a spherical shape.

If you can’t get enough Geodesic domes here are a few more places you should check out: 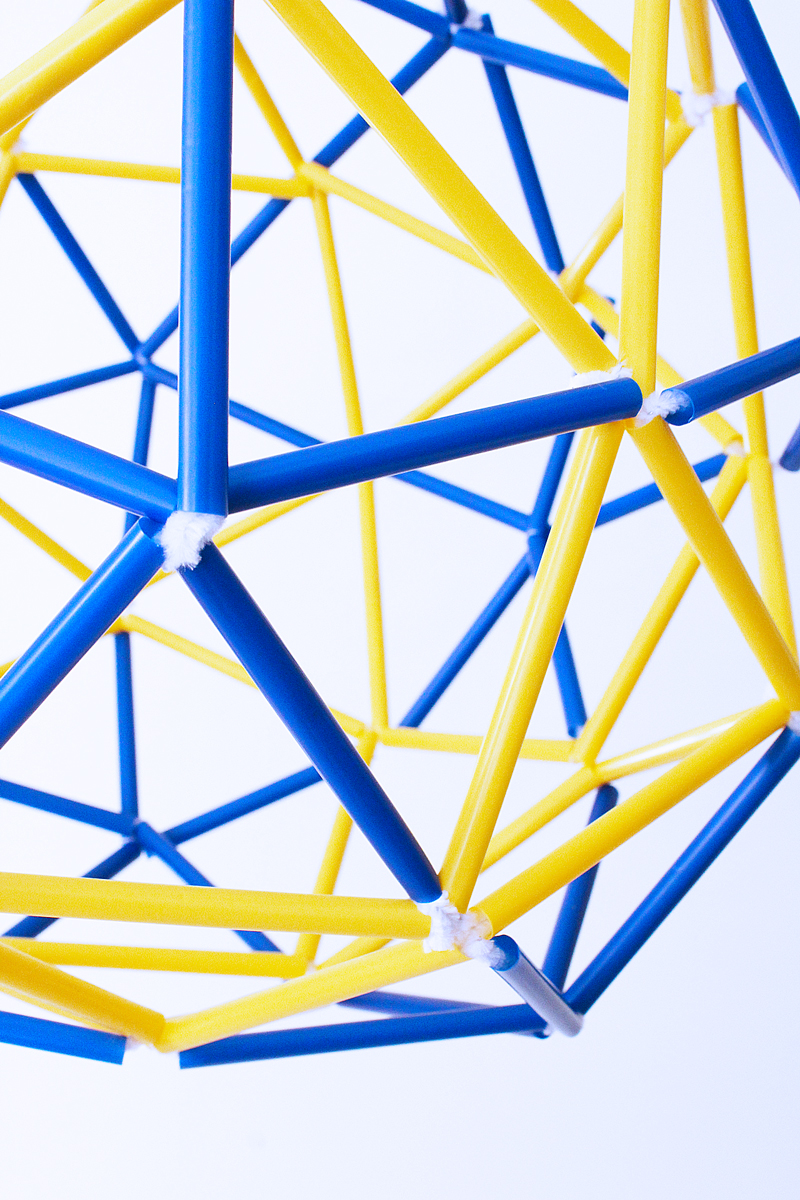 Buckminster Fuller. Of.course. In the architecture world Bucky Fuller is a legend. He ranks up there with Frank Lloyd Wright and Le Corbusier. Are you familiar with him? Well you are now. He didn’t invent the Geodesic Dome, it was actually invented by Walther Bauersfeld, but Bucky Fuller made it a household word. His love of geodesic domes has spread to generations of young architecture students in the past half-century. He saw the potential in geodesic triangulated structures to build strong yet lightweight super structures was awarded patents for a number of his designs. Bucky Fuller is also renowned in design circles for his forward thinking philosophies. He designed the Dymaxion House in the 1940s to be a mass produced type of housing. Imagine if houses were made like cars in factories. In my opinion this makes him the predecessor to the pre-fab home movement. He also developed theories about the world’s limited amount of natural resources and was a environmental visionary. For these reasons and more he is a hero of mine and many, many other designers.

My father the architect was visiting us this week and helped us make our geodesic straw dome. His verdict on this project? “Incredible!” He was impressed at how we broke down the construction into a few simple repeatable steps using very basic materials. You can do it too! Maybe you want to make one to explore geometry with kids or engineering ideas or maybe just for decorative purposes, I mean who wouldn’t want to hang a geodesic sphere from the ceiling? Ha! In any case I hope you are inspired to try making one and join the ranks of Bucky Fuller fans worldwide!

P.S. This would make a fantastic STEM project for older kids! 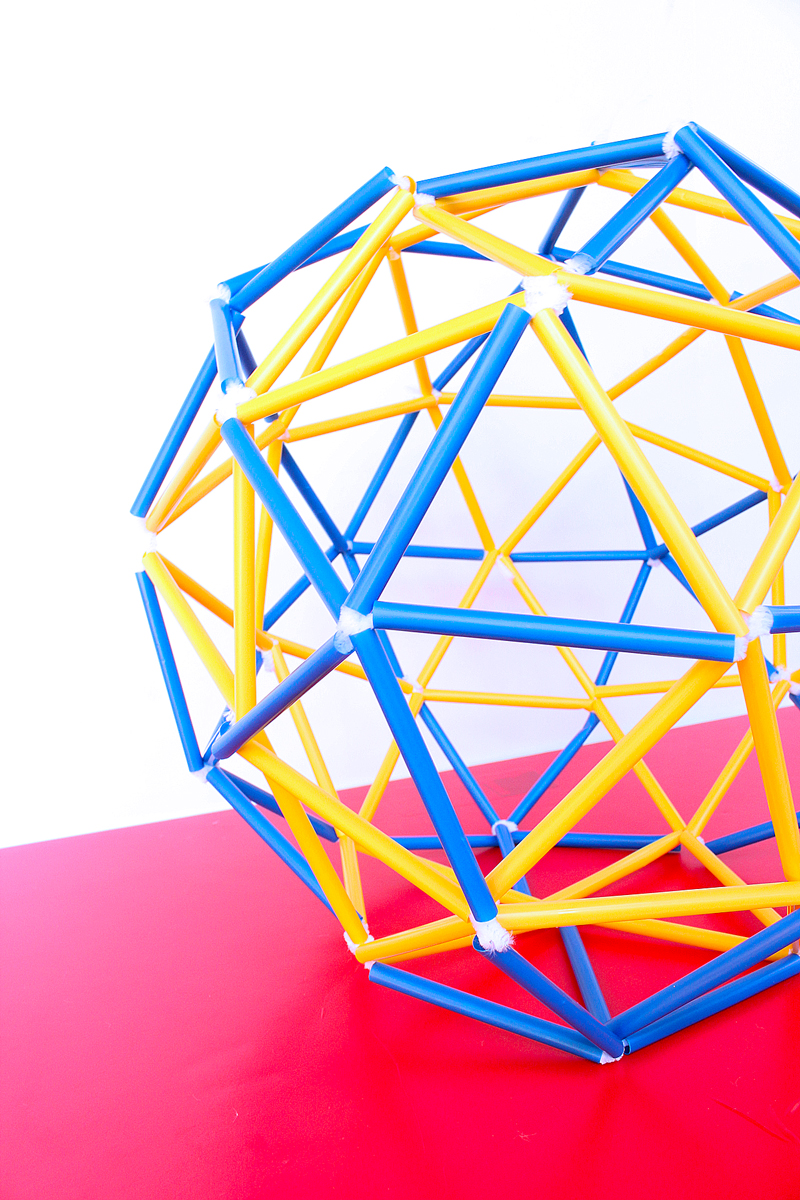 If you enjoyed this engineering project for kids check out Tensile Bubbles and Paper Building Blocks for a more structural fun.

Now that you are pumped about geometry here are three amazing toys you might want to consider adding to your collection, they might just turn your kids into the next Bucky Fuller:

Share This
2515 shares
We use cookies to ensure that we give you the best experience on our website. If you continue to use this site we will assume that you are happy with it.OkRead more